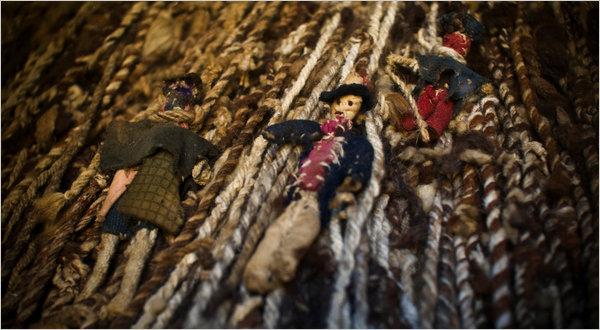 High in the Andes, Keeping an Incan Mystery Alive - by Simon Romero in the NYTimes.

SAN CRISTÓBAL DE RAPAZ, Peru — The route to this village 13,000 feet above sea level runs from the desert coast up hairpin bends, delivering the mix of exhilaration and terror that Andean roads often provide. Condors soar above mist-shrouded crags. Quechua-speaking herders squint at strangers who arrive gasping in the thin air.

Rapaz’s isolation has allowed it to guard an enduring archaeological mystery: a collection of khipus, the cryptic woven knots that may explain how the Incas — in contrast to contemporaries in the Ottoman Empire and China’s Ming dynasty — ruled a vast, administratively complex empire without a written language.

Archaeologists say the Incas, brought down by the Spanish conquest, used khipus — strands of woolen cords made from the hair of animals like llamas or alpacas — as an alternative to writing. The practice may have allowed them to share information from what is now southern Colombia to northern Chile.

Few of the world’s so-called lost writings have proved as daunting to decipher as khipus, scholars say, with chroniclers from the outset of colonial rule bewildered by their inability to crack the code. Researchers at Harvard have been using databases and mathematical models in recent efforts to understand the khipu (pronounced KEE-poo), which means knot in Quechua, the Inca language still spoken by millions in the Andes. ... Read the whole article.
Email Post