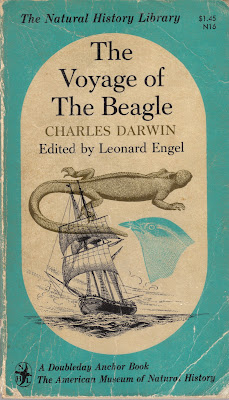 I recently noticed some blog posts listing The Ten Books That Have Influenced Me the Most. This strikes me as a pretty interesting exercise in autobiography. Perhaps it's only fair to my readers to open up a bit of my own inner ecology to help explain my orientation. In any case I couldn't resist taking a stab at it. Of course I had to loosen the rules. So, let's say "texts," since a couple aren't books; and I want to include one book that started as a TV series; and 10 is impossibly restrictive so I have tried for 20 and failed; and one of the "books" is actually an uncountable number of books as you will see. But I did try to stick with the original idea - I am trying to recall the "biggest influences, " in some vague sense, with no other criteria getting in the way, no defenses, no apologies. This was hard to do since so many books cried out to be included. I think the ones that I have listed either changed something in me, or resonated strongly with something already there - my memories of them all are quite vivid. In roughly chronological order of my encounter I have come up with these:

Millions of Cats, Wanda Gag
On Beyond Zebra, Dr. Seuss
The World of Pooh, A.A. Milne
The Voyage of the Beagle, Charles Darwin
On the Beach, Neville Shute
The Grey Seas Under, Farley Mowat
The Lord of the Rings, JRR Tolkien
Tristes Tropiques, Claude Lévi-Strauss
An uncountable number of paperback SciFi books printed between about 1960 and 1970.
The Ascent of Man, Jacob Bronowski
The Magus, John Fowles
The Phenomenology of Mind, G.W.F. Hegel