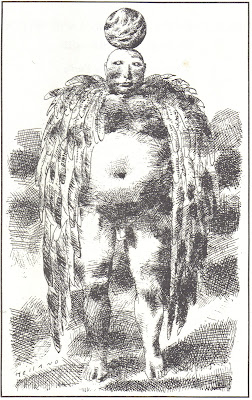 Here is one final paper from long ago, when I was looking for some way to think about the relation between imagination and science, particularly biological science. This paper was presented in 1992 at the Basic Issues Forum Colloquium: Dominion Over the Earth, sponsored by Washington & Jefferson College, in Washington PA. It won 2nd prize and that gave me some pocket money - but I don't think now that it is particularly good, and certainly not well written. Perhaps it suggests some ways one might think about these things, but now I would rather be more emphatic about my rejection of the complex systems paradigms and the tendency to take them literally. But still it's nice to see that I was in part groping towards something like what Tim Morton calls "dark ecology."  - The picture here by the way was done for the Colloquium poster, but I can't find an attribution beyond the "Holland" at the lower left.