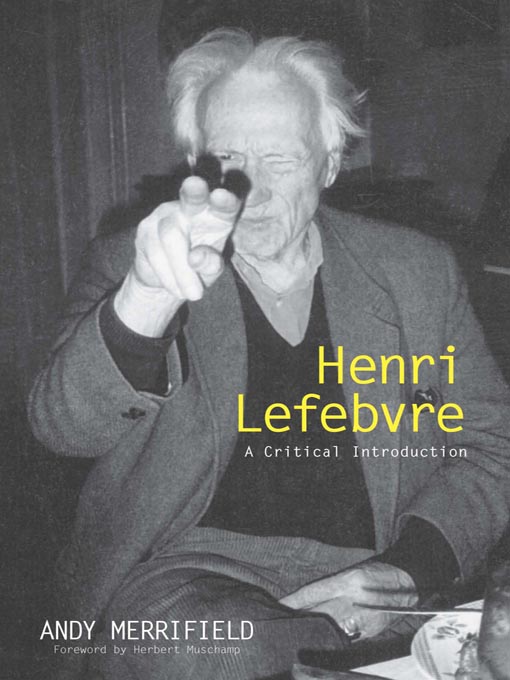 I have been reading Charles Olson lately - for lots of reasons, including the fact of his late enthusiasm for Corbin's work.  I mentioned in an email to Ron Silliman that I was reading Olson's "Propriopception" in the context of my excitement over Leslie Scalapino's use of the idea of he "cognitive/physiological." Ron responded in part with this nugget:

"You could do a lot worse than Proprioception (I always recommend reading it alongside Henri Lefebvre's [1901-1991] Dialectial Materialism, as it is Olson's statement of same as channeled through Jung)."

So that sent me on a little tour - some traces of which I record here. See Henri Lefebvre A Critical Introduction, A. Merrifield, 2006. Lefebvre's most influential work is The Production of Space widely read and admired by urban theorists among others.

“He is perhaps the only Communist – certainly the only political economist – to have dared assert that all he had ever written about was love,” writes Rob Shields in Lefebvre, Love & Struggle: Spatial Dialectics. New York: Routledge, 1999, pg. 7 (Reviewed here and here)

Here is a snippet from an interview with Lefebvre conducted by Kristin Ross in 1983, on the Situationists: (prominently, Guy Debord). I found it particularly striking given Henry Corbin's concerns:

K.R:.: Did the Situationist theory of constructing situations have a direct relationship with your theory of "moments"?
H.L.: Yes, that was the basis of our understanding. They more or less said to me during discussions -- discussions that lasted whole nights -- "What you call 'moments,' we call 'situations,' but we're taking it farther than you. You accept as 'moments' everything that has occurred in the course of history (love, poetry, thought). We want to create new moments."
K.R.: How did they propose to make the transition from a "moment" to a conscious construction?
H.L.: The idea of a new moment, of a new situation, was already there in Constant's text from 1953 [Constant Nieuwenhuys (1920-2005)]. Because the architecture of situation is a Utopian architecture that supposes a new society, Constant's idea was that society must be transformed not in order to continue a boring, uneventful life, but in order to create something absolutely new: situations.
K.R.: And how did the city figure into this?
H.L.: Well, "new situations" was never very clear. When we talked about it, I always gave as an example -- and they would have nothing to do with my example -- love. I said to them: in antiquity, passionate love was known, but not individual ove, love for an individual. The poets of antiquity write of a kind of cosmic, physical, physiological passion. But love for an individual only appears in the Middle Ages within a mixture of Christian and Islamic traditions, especially in the south of France [...] (Entire interview here)
Email Post