A short note on Clark on Olson 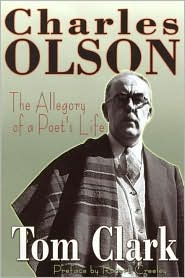 Anyone who spends time reading about Charles Olson's life and writing will soon discover that Tom Clark's biography is the subject of some dispute. I am a rank amateur in this area, and my feelings about Olson's poetry and life project are a bit mixed at this point, but I will weigh in with some observations anyway which may be useful to other tyros in "Olson Studies."

One of the first things I read about Olson was Ralph Maud's "reactive biography" Charles Olson At the Harbor. It's a response to Clark. It does not claim to be a complete account, is much shorter than Clark's book, and simply aims at putting the record straight on many issues. I thought it was excellent and very useful, and it certainly seemed balanced, exceedingly well documented and thorough. Maud is arguably the premier Olson scholar and was a friend of the poet for several years. He takes issue with the general tone and attitude of Clark's work as well as with a rather large number of quite important factual claims that Maud shows convincingly are simply not true. In several instances he suggests Clark is actually slandering Olson. Though I knew full well that Maud was a friend of Olson and thus hardly disinterested, his book made me very wary of Clark, and I put off reading his full biography for quite a while. I read Charles Boer's Charles Olson in Connecticut a few weeks ago. Boer too was a friend of Olson, but his small volume about the poet's last months is hardly a paean of praise and reveals something of the nature of Olson's very difficult and flawed personality. Still, I was reading mostly accounts by Olson's colleagues and followers and I was, and remain, largely sympathetic to this outsize figure of modern literature. As I got deeper into my study of Olson it became apparent that there was too much about his life I simply did not know, and the only place to go for a full account is Clark's book. I read it last weekend in a few long sittings.

So I headed into it with an attitude, and my comments probably have to be taken with a grain of salt. But right from the first few pages I thought "why would you write a biography of someone you didn't like?" Of course there might be lots of reasons, but eventually it occurred to me that perhaps he had begun with an open mind, and had discovered that his subject was in the end rather a sad, conflicted, failed and distasteful character. That is surely possible. I'll leave the details of the critique, of both tone and facts, to Maud. But it is quite clear from the first chapter why Olson's many admirer's find Clark's account upsetting. I did learn a great deal from the book, but it cannot stand alone. Anyone who is looking for a "balanced" view simply must read Maud's "reaction." I came away from my weekend with Clark feeling very much deflated, saddened and unsettled. This is in one sense absurd because there is no law that decrees that a great poet must be a great person - Ezra Pound is enough to prove that. And it is also true that "worship" of the Great Man is a danger we really should all have learned to avoid by this time. Still, I couldn't help but feel that if Olson was as pitiful a figure as Clark tries to paint, then it would raise yet another barrier to my understanding of his work. Surely there are enough contradictions and conflicts in his life and writing even in the views of those who admired and were influenced by him.

I wondered how others reacted to the book. The few reviews I have found are largely uncritical and at times laudatory. Most puzzling to me is Robert Creeley's Preface to Clark's book. He seems to have no qualms about Clark's account in tone or substance. So, I am left wondering. In sum, Clark's book is certainly essential but needs to be filtered carefully. I trust Ralph Maud and Charles Boer for accurate but hardly uncritical accounts of Olson's life and persona. There is plenty more to read if I stay with this, and it is good to know a bit of the nature of the territory. I got into this business in the first place only because Olson made such important use of Henry Corbin. The really interesting thing is how wildly different Olson's world was from Corbin's. I find it important to rub these two fellows together to see what fires might be lit. I have little doubt that Robert Duncan was far closer in spirit to Corbin than Olson ever could be. And that may be useful to ponder. I suspect that in the long run I will spend more time with Duncan's writing than with Olson's.

[ Update... Have re-read Maud's "At the Harbor" - much better than I remembered it. And it seems to me a devastating critique of Clark. I will now read Maud's "other biography", Charles Olson's Reading.]
Email Post
Labels: .