The Eye Idols of Tell Brak 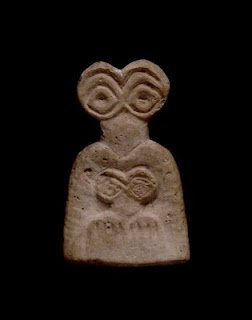 "Tell Brak is the modern name of a huge site in north Mesopotamia, which was clearly one of the most important cities in the region during the late prehistoric period. Monumental buildings appear to have been rebuilt over many centuries. It was at one of these, known today as the Eye Temple, that the archaeologist Max Mallowan excavated hundreds of these miniature figurines, with their pronounced eyes. They may represent worshippers, placed as offerings. The figurines have been grouped into five types. Some have a single pair of eyes, with or without decoration; some have three, four or six eyes; some have small 'child' eye figures carved on their front (like here), and on others the eyes have been drilled through. Examples of figurines with drilled eyes have been found at a number of sites of this period across north Mesopotamia. Recent excavations at Tell Brak have confirmed their date." - The British Museum For details see the excellent Tell Brak Project site of the MacDonald Institute for Archaeological Research of Cambridge University.

And for an overview, see The Eastern Mediterranean 8000-2000 BCE from the Metropolitan Museum Timelines of Art History.