The Statues of Ain Ghazal 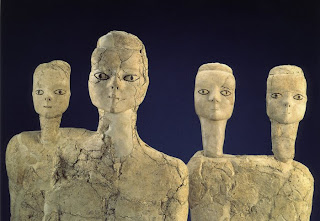 "The statues were discovered in 1984 at the prehistoric site of 'Ain Ghazal, located near Amman, the capital of Jordan. The settlement at 'Ain Ghazal was a village of farmers, hunters, and herders occupied between 7200 and 5000 B.C. E. during the Neolithic period (ca. 8500-4500 B.C.E.). Its inhabitants made objects for daily use, such as stone tools and weapons, and objects that seem to have served symbolic functions, such as small clay figurines of animals and humans. More sophisticated works of art have also been discovered at `Ain Ghazal: large, human-form statues and busts made of plaster, and faces in plaster, which had been modeled on human skulls." - From an Exhibition at the Arthur M. Sackler Gallery