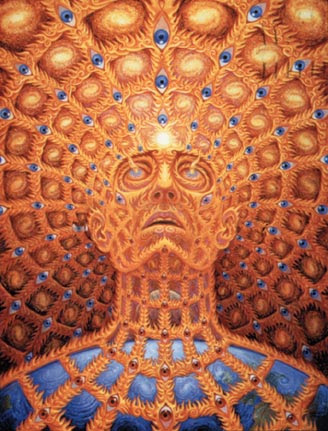 In 1990 while I was a student at the first Santa Fe Institute Summer School I experienced a kind of epiphany - a sudden shock at any rate, and one that changed my life substantially. I was programming some relatively simple computer simulations of the evolution of model ecosystems under the direction of Stuart Kauffman. He was always kind, supportive and generous to me, even though I had approached him as a total stranger in search of guidance. I was in way over my head really, and it was an eye-opener to be among people who were at the top of their fields in mathematics, computer science, physics and theoretical biology. I remember thinking "Ah! So that's what 'smart' means!" I'd never been in such company before. It was terrific fun and very exhilarating. Most of them were some of the friendliest, most interesting people I have known. But among the "Artificial Life" people were a few who were so totally absorbed in the abstract world of computational models and theoretical science as to have lost touch with the realities that had drawn me to biology and natural science in the first place. Some of them seemed to me, and to others there, to have little or no interest in the potential social, political and even ecological implications of their work. It is easy to be swept up in the excitement of pure science. Pure research is about curiosity and is often accompanied by a blind drive, a tunnel vision that keeps one focused on the task at hand and oblivious to anything else. The will to power takes many forms. However "pure" the science might be, there are usually, perhaps always, potential commercial and even military applications lurking somewhere in the background. And some of the AL folks were seriously proposing that if artificial life were ever to be created, in hardware, or software or even in "wet-ware" (actual organic creatures), then it would be somehow the human duty to let such creatures evolve "beyond" us in whatever ways the "coming evolution" might devise. It was indeed science fiction come true.

It was in this context that my moment of clarity occurred. I was walking in the hills above Santa Fe one afternoon and gazing out across the Rio Grande Valley at the hills where Los Alamos National Laboratory lies. It came to me in just these words: "Oh my God! They've got biology too!" But "they," I am afraid, is us - all of us who benefit from and encourage modern technologies.

In retrospect I think that one reason I had immersed myself in natural history and evolutionary biology was that it seemed safe from the kind of  moral dilemmas that have so obviously burdened physics since 1945. I had wanted to play like a child in the beauties and delights of the extraordinary diversity and genuine wonders of biology. Vladimir Nabokov said "My pleasures are the most intense known to man: Butterfly hunting and writing." It was in this spirit that I had originally devoted myself to entomology. But I had eventually succumbed yet again to the allures that draw some of us towards abstraction and disembodiment.

I think Wendell Berry says somewhere that while one possible human potential may perhaps be to download our brains into computers and exit the planet in search of adventure and digital immortality, it should be incumbent on those who choose to try not to destroy the planet on their way out - the rest of us want to live here. At any rate my unease eventually led me away from that kind of science and gave rise to the "Dogmas Idols and the Edge of Chaos" paper. It's useful to remember that all of civilization depends on a few inches of topsoil, which we are rapidly destroying. As much as I feel the exhilarating upward rush and thrust of that masculine drive for power and freedom, I remain wary of any human activities that operate too far from our biological and ecological roots. Stanley Diamond has said that the sickness of civilization consists in its failure to incorporate and only then move beyond the limits of the primitive. Actually, I am suspicious of everything - there is nothing "safe."  As has been pointed out often enough mythologies of roots and homeland have been misused for purposes just as inhuman as the nuclear bomb.

So it has been a long time since I  paid attention to developments in those fields that concern themselves with the new technologies. But it's increasingly hard to avoid their effects, and many people are very much immersed in them much of the time. If I had the time I would return to the work of N. Katherine Hayles which I found remarkable and useful some years ago. I had noticed as I started my work in theoretical biology that many of the fundamental metaphors of the sciences of complexity looked very much like those I had encountered in the "postmodern" humanities, especially philosophy and literary studies. Hayles first two books cover exactly this ground and are indispensable for anyone trying to understand modern culture:

Her next book would be high on my list if I were to re-enter this arena. I read quite a bit of it when it first appeared and know I can recommend it: How We Became Posthuman: Virtual Bodies in Cybernetics, Literature and Informatics, 1999. And given my current interests I will certainly have to read the newest text: Writing Machines  which received the Suzanne Langer Award for Outstanding Scholarship from the  Media Ecology Association  (Suzanne Langer was a great scholar and philosopher whose work on the role of symbols in human culture deserves wider recognition).  A recent lecture by Hayles at the Tate Modern in London can be found here: Nature, Space, Society.

I hope these notes provide an entry into some very remarkable territory for the interested reader.