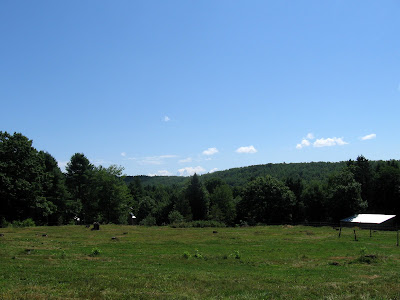 Much of what is most important to me now seems related in one way or another to the ambiguous relationship between two realms that are often called the inner and the outer worlds. Everything about this binary pair can usefully be called into question. It seems natural to me to apply metaphors derived from biology & ecology to the task - especially since I believe that it is in part because Western culture has gotten that inner/outer distinction all wrong that our lives on this planet have become so destructive of the ecological systems on which our lives depend. At least that's one way of going about dismantling the framework of modern culture. Probably any other "fundamental" binary pair would do as well - male/female - sacred/secular - art/science - East/West - primitive/advanced - mind/body. It's a long list. But you can take your pick based on where the energies seem to be.

As a start, it's not a binary opposition. There are inners and outers. And vast arrays of barzakhs - boundary regions with characteristics of both. (Everything is a barzakh - a being between others). Each realm is defined by the kinds of beings that live there. We collapse the wild diversity of experience into a few small boxes. We have to release the creatures back into the wild. And then the first phenomenological task is taxonomic. Taxonomy is the art of making subtle and appropriate distinctions. We might think of Gaston Bachelard as a  taxonomist of these regions, along with the poets he speaks of - who are perhaps the naturalists who desribe the specimens - they are of course field taxonomists as well. Long habit has established some extremely flawed taxonomies. We don't see the world. If we don't see the world we can't live in it well. I don't think there is one way of seeing the surround - but there are evidently many ways of mis-perceiving, and they can be destructive of people and their environments. If I continue to post to this blog it will be with the main intent of drawing attention to art & ideas that seem to me to be of use in an attempt to perceive the world, which must be done if we are to live well - which I take to mean living as fully alive, creative, and aware.

In thinking about the relations between the inner & the outer CG Jung's conception of projection has been important and useful to me. In Jung's practical psychology it is linked to the active struggles of inner alchemy and the battle to become conscious of "complexes." It is impossible to relate to other people as individuals as long as we are unconscious of our projections. This notion can be extended much further - and Jung does this - but here I want to point out Henry Corbin's "cosmological" use of the idea. He wrote,


"Each of us carries within himself an image of his own world, his Imago mundi, and projects it into a more or less coherent universe, which becomes the stage on which his destiny is played out. He may not be conscious of it, and to that extent he will experience as imposed upon himself and others this world that in fact he himself or others impose upon themselves."

This kind of projection establishes the setting, the mood and the orientation for an individual worldview. It was long ago that I first came across something like this idea. In the introduction to The Dyer's Hand, a collection of essays in literary criticism, W H Auden wrote something that has stayed in my mind for 30 years:

"All the judgments, aesthetic or moral, that we pass, however objective we try to make them, are in part a rationalization and in part a corrective discipline of our subjective wishes. So long as a man writes poetry or fiction, his dream of Eden is his own business, but the moment he starts writing literary criticism, honesty demands that he describe it to his readers, so that they may be in the position to judge his judgments."

He then presents his own version of Eden at some length (which is a delight & can be read here) and I have thought since I read it that some such disclaimer, such a self-description, might be usefully required of everyone we intend to spend any time with. (And is a useful personal exercise too.)


Depth psychology traditionally works only on the "inner" aspect of this phenomenon. And that can be extremely useful - up to a point. James Hillman has marvelously critiqued the limitations of this approach over the years, and has written about the depth psychology of the "outer" world with wisdom and grace. And this  seems essential to me - because we do inhabit a place, or more usually these days, many places, and the nature of those places matters immensely. We are not the sole directors of the stage on which our lives play out, and who we are is inseparable from where and how we live. The world we inhabit, the place that we experience, is made from the interaction, the sometimes muscular struggle, between the unconscious projected images and the surround in which we are embedded.

In the present context it seems to me that not only should we want a description of a projected Eden, but also of the actual locale, and the mode of life, of anyone whose judgments we intend to take at all seriously. In that spirit I may take some time now and then to describe where I live, some of what I know about the place, and how I occupy it.

I might start this way - We live on bedrock of the Central Maine synclinorium. - on a portion of the Cape Elizabeth Formation to be precise, which is PreCambrian to Ordovician metamorphic rock that outcrops in long northeast to southwest trending ridges throughout our area. The 1/4 mile ridge behind our house is one of these. The bedrock is overlaid by glacial-marine deposits from the last ice sheet to withdraw some 13,000 years ago. Much of Maine is covered with glacial till, eskers and moraines. The soil that our garden grows in is rather good by New England standards - six to ten inches of Bangor silt loam - and lies formed on top of glacial till.

Well that's all true - as far as I know. And I am glad I know it because it adds to my perceptions of the place. But it's pretty abstract & relies on a few hundred years of the collective efforts of innumerable scientists. The kind of knowledge you need to actually farm or garden is rather more detailed, more precise and more complex in many ways. The way you might desribe this or any other place depends on what you do there.

And then there is this:

The stone wall is unshaded now.
The ferns might die in the strong light,
but the wall was there long before this forest
grew up. It marked the boundary then
too. So much weight. So much work.
They used oxen I guess, but still
that's a lot of hard work and long
long days. No grocery stores
then. But what I want to get at
is this tightness in my back and in my
gut. That's what made me think of the
wall. And all those stones. I have lifted some of them
so I know. What a job a wall like this is - how it huddles
low into the earth, all lichened over -
maybe the snakes will come out now and sun themselves.
They would remember this wall from long ago. They
would. Part of the landscape now - a natural object in a way.
It's not like anyone would make one
of these now - nobody would. And anyway
nobody could, here. Hell, most of the stones are
already in these walls - following the curves of the
hills - you can see - now that all the trees are out of
the way. It's kind of sad, really, in a way - thinking of those
old guys and their oxen and their walls
and their strong, cramped and bitter backs.


Whether this is "good" as a poem is entirely beside the point, but I wrote it as a response to and description of this place.  What interests me - what obsesses me - is how to navigate among these - and many other - ways of engaging the worlds we inhabit.