A World Made of Stories 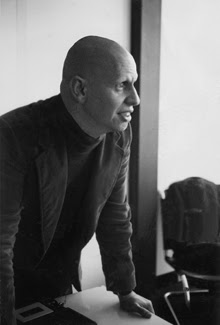 Henry Corbin's account of the prophetic tradition convinces me that he would have enthusiastically defended Muriel Rukeyser's claim "The world is made of stories, not of atoms." From a radically different perspective, we find a similar view of the cosmic (and broadly speaking, the "ecological") function of language articulated by Robert Bringhurst and David Abram (about which more later). This makes a consideration of the "function of narrative" of rather more than "literary" interest. (And anyone who takes Corbin's view of the cosmic role of creative imagination at all seriously must conceive of literature and the arts as on an equal footing with the natural and social sciences and philosophy, much as Rorty and Serres and others have suggested.)

In this connection it's worth reading David Antin's discussion of narrative, recently posted in three parts on Jerome Rothenberg's Poems & Poetics blog.  [Originally in Pacific Coast Philology, Vol. 30, No.2, 1995, pp.143-154, and to appear in Antin’s Radical Coherency, to be published later this year by University of Chicago Press.]


From Part 1 "So let's define narrative as the representation of the confrontation of a desiring subject with the threat or promise -- or threat and promise -- of transformation.

From this definition it's easy to see why I'm claiming that narrative is a fundamental cognitive modality. Subjects are continually confronted by the promise and threat of change. But no promise comes without the threat of fulfillment. If a beggar wishes to become a king and there is a chance of his becoming one, there is also the possibility that the change will annihilate him together with his desire, leaving behind only a troubled king suspecting his wife, his sons, his brother-in-law, or a revolution in the street.

Any transformation, no matter how promising, contains the threat of destroying its desiring subject in the magnitude of fulfillment. But what the beggar wants is to remain the beggar inside the life of the king, or to hold on to that subject position from which the life of a king would be a sufficient satisfaction to at least offset the gravest problems of statecraft, which the beggar has most likely never counted on. And it would be in the interest of the king, who is suffering from all the anxieties of kingship and in whose state of mind the beggar remains only in threads of nostalgia and anxiety, to build a bridge from his present life to his past. As it would be in the interest of the beggar to build a bridge from his present to his possible future, to imagine the speculative consequences of his transformation.

This bridge building across change is what I would suggest is the central human function of narrative. The act of reconnecting subject positions across the gulf of change is what constitutes the formation of self. All self is built over the threat of change. There can be no self until there is an awareness of one's subject position, which can only be created by the threat of change or the memory of change. Every change creates a fracture between successive subject states, that narrative attempts and fails to heal. The self is formed over these cracks. Every self is multiply fractured, and narrative traversal of these fracture planes defines the self. Narrative is the traditional and indispensable instrument of self creation."  Read all of Part One.

From Part 2
... I would like to suggest that we do not derive our narrative competence from story telling, but from dreams. Because the goal of narrative is to make present, not to make intelligible, and a dream is nothing if it is not a making present of an anticipated future and a remembered past in which we always have a definite stake, because they are always anticipated and remembered in the light of desire.

I am supposing here that dreams are the narratives we construct for ourselves at night. There are, of course, many people who do not believe dreams are narrative -- some because dreams are often "absurd" or "illogical," others because they are apparently fragmentary. But there are also many dreams that are not especially illogical if somewhat fantastical or absurd; and there are many powerful, absurd and apparently illogical waking narratives, and the fragmentariness of some dreams may be the consequence of either an extreme ellipticality of the dream -- we are "telling" these narratives to ourselves and do not require as much context as narratives constructed for others -- or the result of imperfect recall. Dreams are accessible only through recall, our own or reported by others; and the neurological evidence of the fairly regular temporal patterns of rapid eye movement that seem to correlate with dreaming suggest a kind of fullness of the dream cycle that rarely corresponds to the dream reports. So it is probably reasonable to assume that dream recall is often only a partial representation of the dream experience. Read all of Part 2.
From Part 3
If a narrative is about making present and a story is about making sense, the two effects may come together or separately, but they invoke different cognitive capabilities and are produced by different means or by the different deployment of the same means. Read all of Part 3.
Email Post