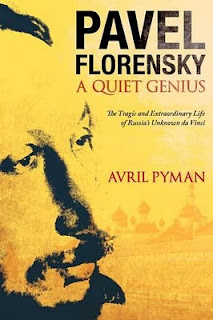 From the publisher: This is the first biography in English of an extraordinary polymath whose genius was stifled and finally extinguished by the Soviet Union. He has been compared to Pascal, Teilhard de Chardin, even da Vinci. Florensky was, at one and the same time, a supremely gifted philosopher, mathematician, physicist, inventor, engineer and theologian. He was also a poet and wrote studies of history, language and art. Although he taught philosophy for most of his working life, his interests were wide-ranging and profound and included the study of time and space, theoretical and applied physics, aspects of language, and the properties of materials and geology. His book The Pillar and the Ground of Truth is widely seen as a masterpiece of Russian Orthodox theology. Avril Pyman looks at Florensky’s life, from his childhood as the son of a railroad engineer to his mysterious death, and provides a populist perspective on his achievements. Her book celebrates the life of a little-known twentieth century Christian genius.
"Avril Pyman’s marvelous biography of Pavel Florensky is a labour of love and the fruit of decades of dedicated research into the intellectual culture of Russian modernism. Over the past thirty years Florensky has emerged as a giant of European culture of his day, but his lifelong intellectual project to a large degree remains poorly understood (which is understandable given the breathtaking variety and spectacular ambition of his endeavours). With Avril Pyman’s book Florensky has finally begun to receive his due. With the deft touch of a seasoned biographer Dr Pyman uncovers the intricate and poignant design that lies at the base of Florensky’s various intellectual activities and engagements. Displaying a complete command of her subject Avril Pyman draws on the vast corpus of Florensky’s published writings, most of which have never been translated into English, on the memoirs and correspondence of his family and friends, and on the constantly expanding body of scholarly literature on him. Eminently readable and authoritatively precise, Dr Pyman’s biography will be a touchstone for all future work on Pavel Florensky." -- Robert Bird, Chair and Associate Professor, Department of Slavic Languages and Literatures, The University of Chicago
Email Post