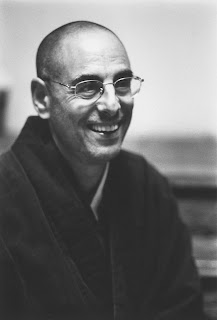 My initial interest in Fischer, poet and zen priest, was sparked when Ron Silliman told me that he was an important influence on Leslie Scalapino.

"Norman Fischer’s work is best described by Hank Lazer as part of a new spiritual realism that has developed in the past fifty years, first noted by Gertrude Stein in the 1935 essay “Poetry and Grammar,” which was a riposte to Emerson’s “The Poet.” Stein wanted to get writers to move away from Emerson’s focus on the poet’s transcendental relation to nature and divinity onto language itself, “in which a form of divinity resides, not wholly beyond words, but within them.” This is developed by Lazer and Fischer. Lazer describes his creative poiesis as investigative, spiritual, and heuristic:


" … a phenomenology of spiritual experience — a writing that engages momentary experience and that embodies particular intervals of consciousness.”